Science is not for Everyone,

and Especially not for Girls

on DAST in Greece

Scientist. Is it a word describing a woman or a man? Is it the person happy and social or eccentric and lonely? How do some children in Greece  draw a scientist? To further understand these questions we reached out to Dr. Vasilia Christidou, associate professor of School and Early Childhood Education, in Aristotle University of Thessaloniki.

Dr. Vasilia Christidou is a physicist, with a doctorate in Science Education, working for many years on the relationship between science and children. She has published more than 63 articles in peer-reviewed journals and tries within her research and many actions to bridge scientists with children and education.

We are all born within a pop culture, which is full of stereotypical assumptions regarding what a scientist looks like and whether is a man or a woman.

Usually, a scientist appears to be a man, lonely, eccentric, intellectually superior and hardworking. Additionally when it comes to movies and cartoons he usually appears to be the “evil guy”, with the ultimate purpose to destroy humanity, and hardly ever he appears to be the savior. Male characters, such as The Hulk, Doctor Doom, Iron Man or Dexter, fulfill the role of scientist icons of the majority of our early childhood and teenage years, whereas women characters engaging with science are really hard to find.

Dr. Vasilia Christidou who has been collecting drawings of children in Greece for the DAST project for the last 15 years, now shares with Greek Women in STEM her findings.

Her general instruction to children is to “Draw a scientist” or “I want you to draw a scientist showing me what you know about scientists and their job”, then collects the drawings and processes the data recovered. Right next to her are many valuable collaborators, such as Fotini Mponoti from the University of Thesally and Vasilia Chatzinikita from the Open Greek University. Additionally, the contribution of Giannis Samaras, teacher and scientist, is noteworthy during her research.

Science Isn’t For Me

A very valuable tool of Dr. Christidou’s research is the interview realized after the Drawing Task, so that the children can have the possibility to express their thoughts and elaborate further their drawings.

In these interviews  many children, usually from a younger age group, expressed their wish to become scientists themselves sometime in the future in order to help people. However there were some that reported that science isn’t for them.

Dr. Christidou explains to us that “children who report that science is not for them, mainly believe so because they have the impression that science requires endless efforts, many sacrifices on a personal level and a high degree of intellectuality. According to them, these are characteristics that don’t belong to an average person and assume, therefore, that they won’t have them in the future.” 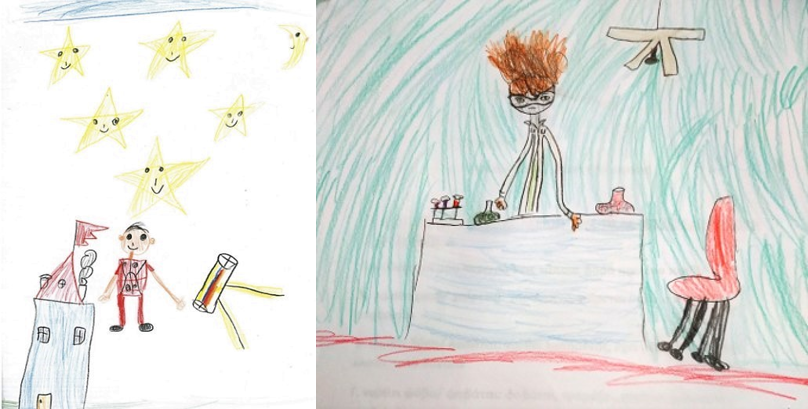 Science Is Difficult for Women

According to a published article in 2012, which included drawings of children 8-18 years old, when asked, 24.5% of girls drew a woman as a scientist whereas only 5% of the boys drew a woman as a scientist. In a similar study where an interview was included, some children who preferably drew a man expressed their concerns about whether a woman can combine family and a scientific career at the same time.

The lack of women in academic positions is a reality, but the fact that “this particular idea lays in some children’s heads must concern us and it gives the impression that this particular idea cannot change easily without specific interventions”, says Dr. Christidou.

A very important discovery published in 2016, was when Dr. Christidou and her collaborators included along with the Drawing Task, the Picture Selection Tsk. According to her, in this task “there are presented two different pairs of pictures and the children are being asked to choose which picture is more likely to match with a scientist.

Where is this difference coming from?

Other studies also suggest that “the Drawing Task can be perceived by a child as the instruction to draw someone who fits well in the stereotype and hence it will be easily recognized by everyone. This could explain why children often draw men as scientists, including all the stereotypical elements that can be found in the pop culture and science fiction literature”.

“The conversations with the children often show less stereotypical ideas than their drawings”, she adds.

In a new, unpublished work, Dr. Christidou discovered that children even at the age of 4-5 years old have already developed a solid image of how scientists looks like. This can be explained from the large amount of information a child can receive these days.

The Public Image of Scientists

“The stereotype exists because it is recognizable by everyone”, she explains, as scientists today choose to present themselves in public using a picture which usually checks all the above mentioned stereotypes that are later found in children’s drawings.

“The scientists usually show to the public pictures in their office, in the labs, in front of a library, with colleagues in conferences, while avoiding to show other aspects of their everyday life, that people can relate with”.

In addition to that, the representation of women, especially in the STEM fields, is not there yet. Hence, there are fewer pictures of women in scientific websites.

What can we do today to stop and turn the tide?

“Unfortunately there aren’t any easy and quick solutions to stop the existence of a long lived stereotype within the school and society”, Dr. Christidou explains.

As it has been shown by international research, teachers have the tendency to pay less attention to girls during a STEM course in classroom. Additionally, schoolbooks continue to depict a man as a scientist and at the same time, the parents choose to segregate boys and girls from a very young age when choosing toys which need more technical skills for the boys and dolls for the girls.

“Nevertheless, there are some ways of intervention, which have been tested and show promising results”, she adds.

For example, children can learn to work in a school simulating methods and practices used by scientists. Also, it has been shown that when children get to meet scientists in real life, that leads to a positive impact on their perception of a scientist.

“It is crucial for the children to understand that people in science have habits and hobbies like everyday people. They need to grasp the idea that science includes everyday feelings, like disappointment and happiness, good days and bad days”.

At the end of the day we all need to understand that working in science is not a privilege of an elite group, with unique characteristics and everyone can be a scientist. The word is neither female or male and scientists can be happy, sad, eccentric, lonely, social and all the above at the same time.

*The drawings are provided by Dr. Vasilia Christidou to Greek Women in STEM for publication. 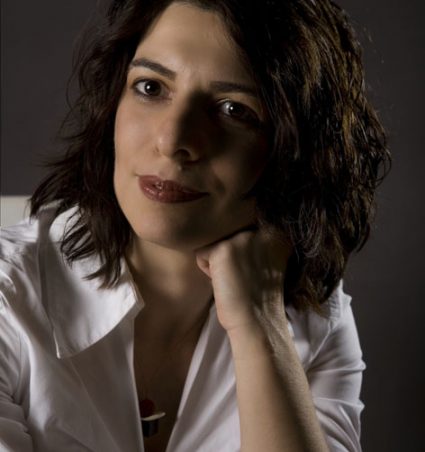 Your career path is unique and can lead you into unlimited possibilities.

The colours of Hydrogen

Hydrogen and the meaning behind its colours