Rocks are a “treasure chest” in understanding Earth’s evolution

Rocks are a “treasure chest” in understanding Earth’s evolution

Eirini M. Poulaki graduated in 2015 from the Department of Geology and Geo-environment of the National and Kapodistrian University of Athens. She then moved to the United States where she received her Master’s degree from the University of Texas at Austin in 2018. Today Eirini is a PhD candidate in Geosciences. In parallel she has a distinguished career as a teaching assistant at the University of Athens and the University of Texas since 2015 and she has been honored in 2020 for her teaching contribution to Geology courses with the Outstanding Teaching Graduate Assistant Award from the Jackson School of Geosciences. Among other distinctions, the same School has honored her with two awards for her field research in 2017 and 2019.

Observing and understanding the convergent boundaries of lithospheric plates (also known as subduction zones) she studies how the Earth evolves over time. Research on subduction zones reveals the culprits of major natural disasters such as earthquakes and volcanic eruptions. Some of her research methods are analysis of rock chemical composition -in particular minerals- and timing of their submersion (~60 km depth) or re-emersion to Earth’s surface.

Eirini’s research conducted in the islands of Southern Cyclades, Sikinos and Ios she determined the exposed metamorphic rocks’ age and analyzed their composition. This can provide important information about the evolution and “behavior” of the Greek islands area over the course of millions of years.

Keep reading to know more about Eirini and the field of Geosciences.

What sparked your interest in science and what inspired you to work in Geology?

For me, science means curiosity to discover the world around us as well as the excitement and realization of how little we know about our planet.

I have always loved the environment and physics, but I was not aware that I could combine these two in geology. Geology fascinated me from the first moment because I was able to understand phenomena and processes that always interested me, such as why the rocks in Cyclades islands are blue and green? Why do we have such a high seismicity in Greece? Why do we have mountains by the sea?

A turning point for me was when I started working with Dr. Konstantinos Soukis, who encouraged me to work on the island where I come from, Andros. Having a teacher, but most importantly a true mentor by my side, who believes in me and guides me, gave me even more motivation to continue my research and move overseas to start my postgraduate career at the University of Texas.

My research helps understanding the major tectonic problems concerning the Earth’s evolution and surface morphology as we know it today, through the prism of millions of years. My desire to acquire and communicate this knowledge to new generations of geologists drives my research and gives me inspiration and willingness to continue.

Do rocks have age? What techniques do we use to determine it?

The rocks have different ages, they have the age of their creation, the age of their exposure on Earth’s surface, the age they were under high pressure and temperature. We can find the “relative timing” of rocks by studying their fossils or the “absolute timing” using their mineral components. Minerals help calculating rocks’ age by analyzing radioactive isotopes found in them. The most common mineral we use for this purpose is zircon. Have you heard the phrase “diamonds last forever”? Forget it!  “Zircon lasts forever” and it gives us tons of information about rocks.

On the other hand, for sedimentary rocks which built after erosion of other rocks and their age cannot be determined based on the zircons, we apply other techniques. In this case the determination of rocks’ age refers to their recent but not older age and is explained by the term maximum depositional age. For example, in a pirate shipwreck, the treasure chest will have coins from all places the ship was looting, the shipwreck (i.e. the rock) cannot be older than the most recent coins (i.e. erosion products) in the chest.

Where does the knowledge of rocks’ age contribute?

First, by defining rocks’ age we learn about Earth’s age. At the same time by knowing minerals’ age, we learn how Earth is evolved over time. Moreover, determination of the relative age of rocks’ fossils provides additional evidence which contribute to the evolution theory (Biologists appreciate this very much!). We can predict the location of hydrocarbon source layers (oil companies often have geologists working on such projects). We also calculate the time of geological processes or even when a meteorite fell on Earth. In general, by understanding how Earth functioned in the past helps us understand how it is today or will be in the future. For example, knowing the activity history of a volcano helps us understand its volcanism in the future. This knowledge is particularly important for Greece because of the frequent geological activities in the Greek area, as it could help us understand a future earthquake or volcanic activity. In addition, we can estimate the time of extinction of human populations due to natural disasters, and so there is a significant contribution of geology to archeology.

How easy is it to prepare and perform an experiment in field?

To me this is the “magic” of geology. As field researchers, we have the opportunity, in addition to work in laboratories and in front of our computers, to move outside to the “countryside”. Geology started as a field science; for the first geologists, those who initially tried to understand the Earth, they were mainly conducting their research outside in the mountains, in coastal areas, in valleys.

It was the observation of the outside world that led us to the laboratories. There are many different versions of field research, from mapping an area, collecting measurements and rocks for laboratory experiments, or even spending a lot of time on a ship collecting information from the seafloor. Field research work requires strength, discipline, and preparation not only before starting but also when you are in the field performing it. Working outdoors in addition to being out of the office and close to nature, you learn how to collaborate with many different people or to adapt to different cultures of the countries you are visiting, and sometimes how to work under extreme conditions. But in the end, you get rewarded as you make your hobby a profession, and because to climb on the top of a mountain ends up being part of your research.

How someone who just started their career in Geology could get involved in research?

I am sure that many of you have heard Sheldon from “The Big Bang Theory” saying: “geology isn’t a real science“. Geology can be a relatively new science but anytime you look around, from your computer and toothpaste to the valley, mountain, or coastal area you are living, everything has to do with geology. Geology is based on mathematics, physics, biology, chemistry. If you want to become a good geologist, you must learn how to think critically and combine many different sciences in order to understand better our planet (and not only this planet—many geologists deal with other planets of our galaxy!).

Most of our concerns in everyday life are usually human-centered and as a result we forget how “small” we are in front of the geological history of the Earth. The Earth can be described as an entity that was there before us and will be after us, and its research could motivate people to respect more the environment and leave the Earth as beautiful as they found it.

As a geologist and researcher, you do not have to constantly work behind a computer or in a laboratory, but you can travel the world by hiking, climbing, and even skiing as part of your research. Personally, as a field researcher I have visited Svalbard, Morocco, Southern Spain, as well as various places in America and of course Greece.

Do you think there is a need for more geologists?

Unfortunately, in Greece the science of geology is underestimated. There is a misbelief that low‑rating Schools are not good Schools. Geologists do not just break rocks as many mistakenly believe. Hydrogeology, renewable energy sources, geophysics, seismology, oceanography, climatology, and more, are areas of geology that new scientists are always needed. So, my answer is yes! If someone loves the Earth and science, Geology is the right decision for them. Natural disasters, wildfires, the oil crisis, global warming, these are all phenomena and global problems that geologists are constantly trying to solve.

Last, how is it to be a woman in the world of Geology?

In my career so far, I have seen many people being skeptic about whether I can work outdoors in the field. When I was looking for a master’s program and I was trying to reach out to professors for recommendation letters, some of them told me that as a woman I could not work in the field. Opinions that female geologists cannot be field researchers contribute to their unequal categorization in the field but also constitute a “myth”.

I am very happy that the statistics have recently changed. The only reason that all these never affected me was because I believed in myself and I had a strong will to continue. As difficult as it may seem, it is important for a young scientist to turn a deaf ear to such allegations and to realize that these are outdated beliefs which should leave them unaffected. Also, the global community of women in all scientific fields is growing and there is a willingness on their part to help and support other women in all steps of their careers. 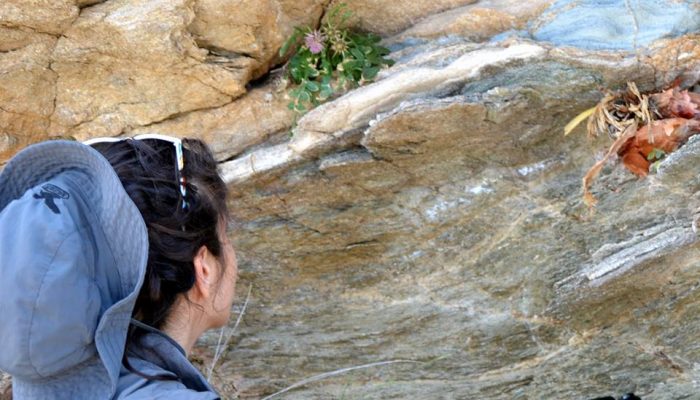