Dr. Evangelia (Lillian) Balatsou is a cognitive neuroscientist with a special interest in how our brain perceives, processes and produces language.

She received her PhD in Neuroscience from Bangor University and now works at voiceweb as a Speech Scientist and Project Manager. She has researched language and the human brain in speech with encephalograms, behavioral experiments and computer simulations.

Her love for science communication was evident since her doctorate, when she taught about scientific writing and science communication. Today she is the founder of Greek Girls Code, an initiative launched by account takeovers on Twitter, inspirating young girls to engage in science.

Read more about Lillian and the Greek Girls Code below:

Are there specific parts of the brain that are activated during language production?

Language production is associated with increased brain activity, more blood oxygenation in the brain, in the Broca area in the frontal lobe, while the understanding of the tongue in the Wernicke area in the temporal lobe. Both points are usually located in the dominant hemisphere of the brain, that is, in right-handed people on the left. These areas were initially identified in people with aphasia, and later the development of neuroimaging methods, such as magnetic resonance imaging, helped to categorize them as the most well-known language areas in laboratory experiments.

Are these centers less developed in people born with hearing impairments? Are there any other stimuli that can activate them?

The area of speech comprehension and the area of speech production are also activated in sign language, they just tend to be more inactive. When there is hearing loss, the brain tries to either compensate for the loss of this sense by giving more basis to other senses or by structurally reforming the processing of stimuli related to linguistic communication in sign language.

The more languages we learn the better? Are new synapses being created or do we just have to “sacrifice” something we know?

There is a hypothesis that bilingual people have developed cognitive skills compared to monolinguals and that they are less at risk of developing cognitive aging, which is associated with diseases such as Alzheimer’s. This of course comes at a superficial cost at younger ages, because the brain learns to function between two languages, some temporary disadvantages may be the confusion between the two languages ​​or a delay in language proficiency, which is also temporary. In any case, the scientific community for the most part encourages bilingualism.

Is there a limit to the ability to learn?

There is no clear answer. Historically, people with extensive multilingualism have been recorded, but because it is not a common phenomenon, there are no systematic studies on how the human brain learns to process multiple languages ​​simultaneously. Surely we can learn quite a few independent parts of many different languages, they just don’t seem to all have the same place in our minds. The human brain may have a particular preference for one or two dominant languages, but this does not mean that its ability to assimilate new knowledge is limited. Also, important parameters for learning new languages ​​are the fluency and the level of acquisition that we aim for, as well as the language families to which the languages ​​we learn belong-if e.g. belong to different language families from our mother tongue.

Yes! Language and emotion, although different functions, are inextricably linked, either through verbal or non-verbal features. Emotions can affect the prosody of speech, the choice of words, and even the syntactic structures we use in our speech. Language also affects emotions. Recently, in collaboration with Polish researchers on encephalograms, we found that bilingual speakers with Polish as their mother tongue, when speaking in their second language, English, are not only less emotional in their reactions, but also expect less emotional stimuli from the environment around them.

What is the age that determines which language we will speak as a mother tongue?

The hypothesis of the critical period argues that in the first years of our lives, usually up to five, it is decided what our mother tongue will be, as well as the ability to speak or understand human language in general. There are examples of typically developing children who unfortunately grew up in abusive environments with deprived language stimuli during the first years of their lives and never fully mastered human language, despite the years of speech therapy that followed their rescue.

When does the language associated part of the brain stop developing? Are there people who are born with a greater inclination towards multilingualism or is it a matter of practice / stimuli?

According to neurobiology, the myelin sheath in the nerves of the brain matures at about 18 months, a period during which most babies begin to speak. Linguistic and cognitive functions, however, continue to develop for years and are even strengthened in the educational environment. When it comes to the tendency towards multilingualism, it is mainly a matter of practice and stimuli, with the social environment and language friction playing a dominant role.

How do you digitize language?

Human language can be digitized into the parts of automatic speech recognition, processing, comprehension and natural language production. It usually starts with the automatic conversion of a sentence from an audio signal to text, after the semantic processing of the computer data to extract information that allows us to understand the verbal intent and then going back to the speech synthesis, ie the conversion of the computer data into recognizable physical speech.

Can you give us some examples of computer language models?

Computational language models have been created to simplify the mechanistic processes of the brain. With mathematical simulations, scientists are able to deconstruct the levels of processing of language stimuli and the processes that take place at each level. A simple example is whether words compete with each other in speech. A computer model in favor of competition contains an algorithm that makes it mathematically possible, such as e.g. the softmax function, while another does not. Other examples have to do with phonological errors-e.g. to say courage instead of lighthouse. Such errors are found in clinical populations. A computer model that simulates phonological errors usually allows these errors to be transferred to the articulation stages. Computer models have helped scientists understand other aspects of intellect besides language, such as perception, learning, and reasoning. Modern artificial intelligence, such as mechanical and in-depth learning and especially artificial neural networks, relies heavily on computational models of higher intelligence that began in the 1980s.

How can one participate in the management of the Greek girls code? Are there selection criteria?

They can register through our site or contacted via Twitter. There are no strict criteria, except for women who are involved in science, technology, research or writing code. The goal is to give young women a step to share their work and achievements in traditionally male-dominated or minority industries.

How long does the management take? What are the requirements?

Account management lasts one week. Administrators usually share their history, their daily pursuits in science and research, and exchange tips or advice that they find useful. Another goal of this initiative is to highlight the diversity of Greek scientists, to make the image of the modern Greek woman who excels in a laboratory or in a corporate environment more accessible and familiar.

What are your plans for the future?

The goal is to create a community that can offer as much as possible. Do open activities with the team and be extroverted, so that young girls who will need advice and guidance for a career in science get in touch with us. We want to encourage as much as possible the young girls to follow their dreams without fear but with a lot of courage!

Is there a phrase / quote that expresses you?

A tip for young girls who have not yet chosen which field they want to follow?

To do something that will make them passionate, not to be afraid of failure or mistakes and not to stop chasing their dreams-they matter! 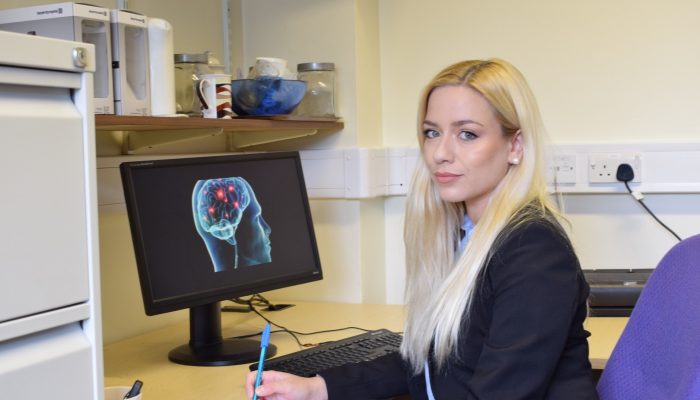