Forget Princess, I want to be an Astrophysicist!

Dr. Eleni Vardoulaki is an astrophysicist and postdoctoral researcher at the Thüringer Landessternwarte Tautenburg, Germany

Forget Princess, I want to be an Astrophysicist!

Dr. Eleni Vardoulaki is an astrophysicist and postdoctoral researcher at the Thüringer Landessternwarte Tautenburg, Germany

Dr. Eleni Vardoulaki is an astrophysicist and postdoctoral researcher at the Thüringer Landessternwarte Tautenburg, Germany, and a coordinator for data-intensive radio astronomy.

She has an impressive resume with a series of publications in scientific journals, international conferences, events and lectures! Her researcher career has her constantly traveling to the United Kingdom, Portugal, Germany, America even until…Hawaii!

We got to know better Dr.Eleni Vardoulaki through her interview for Greek Women in STEM, on her research work and astrophysics.

How did Astronomy piqued your interest?

I believe every child growing up under this dark, wonderful Greek night sky has a love affair with space and wonders how the Universe was created. I have been always fascinated by space and when I was a child I wanted to become an astronaut, but my involvement in the field of astrophysics started at school and especially while I was studying at the University, at the Physics Department. Astrophysics was an extra-curriculum course. Of course my collaboration with my professor during my bachelors thesis inspired me to pursue research in astrophysics. The perosn who guided me and taught me not to give up, and to pursue what I want – even when everything seems dark and insurmountable – was the supervisor of my doctorate studies at the University of Oxford. He was an amazing scientist and beautiful person who unfortunately left us very early, in 2012. He told me that shortly before submitting his doctorate he was ready to give up. But he did not, something kept him going. He found the strength inside him to complete it.  We are very lucky as astrophysicists that he did not give up, because he paved the path of radio astronomy, the field I am studying.

Which is the topic of your research today?

My specialty is observational astrophysics, that is, the study of the Universe using telescopes and specifically the study of galaxies when the Universe was younger. I’m interested in understanding why some galaxies have active nuclei and others do not. I want to understand their similarities and differences, how they interact and release energy in their environment, how they evolve over time. It is something like a galaxy sociology, but with lots of physics and mathematics in it!

I use data from telescopes in radio-waves, optics, infrared and X-rays to understand galaxies’ properties and their environment. In my new position at Thüringer Landessternwarte Tautenburg I also have the role of coordinator of a collaboration between astrophysicists and data scientists to study new methods for processing large volumes of data, especially for those coming from current and future radio telescopes.

Any important/moving moment you experienced in your lab with your research team?

Yes! Every time that someone brings muffins to the office! Jokes aside, I feel lucky to have such brilliant colleagues. My international career has helped me work with scientists from all over the world and in different institutes: University of Ioannina, University of Oxford, Institute of Astronomy in Porto, University of Crete, Caltech, University of Bonn and Max-Planck-Institute for Radio. I am also a member of international collaborations such as COSMOS, EMU and MeerKAT. Through these collaborations we try to understand how galaxies were born, grew and evolved, until what we have ‘now’, galaxies like ours. Many happy moments are around times when we present the results of our research at international conferences and publish them in international scientific journals.

Without technologies offered by astrophysics, as well as the complex calculations that must be done on daily basis in radio astronomy, the global GPS system would collapse

Can you mention an important discovery that we use in our daily lives and owe to Astrophysics?

The applications of astrophysics in everyday life are many! Some examples are the GPS, wifi, ceran, medical applications and algorithms, even cell phone cameras. I have written a relative article (in Greek).

One of the most important applications of astrophysics that we use in our daily lives is the global positioning system or GPS. GPS is based on the general theory of relativity, accurate time measurement and the international network of Very Long Baseline Interferometry (VLBI). Accurate time measurement is important because the day does not have exactly 24 hours. Without the VLBI network of radio telescopes, this accurate measurement would not have been possible. In it hydrogen masers measure time in unprecedented accuracy. These help synchronize observations from the various telescopes that make up the grid. The hydrogen masers were manufactured by the Smithsonian Astrophysical Observatory and NASA / Johns Hopkins Applied Physics Laboratory. These are more accurate than atomic clocks and make the global GPS system feasible. Without such technologies, as well as the complex calculations that must be made daily based on radio astronomy, the global GPS system would collapse.

Is there an extreme theory for the universe that is being seriously considered scientifically?

Any theory that has not been proven experimentally, or observationally, can be considered extreme. From “how many planets like Earth there are in our Galaxy’’ to ‘’how our Universe was created’’. One of them is the existence of dark energy. The cosmic recipe of the universe wants dark energy to exist in the largest percentage. Everything we see and surrounds us is known as visible or baryonic matter. This is only ~ 5% of the components of the universe. The rest is dark: dark matter (about 27%) and dark energy (about 68%).

We observe dark matter indirectly by observing its effects on matter. Imagine it as the invisible skeleton of the universe, on which all visible matter will be built upon (stars, planets, galaxies, galaxy clusters). We have not detected dark energy yet. What we understand about the nature of dark energy is that it helps to accelerate the expansion of the universe. We know that the universe is expanding. It is happening at a rapid pace. Imagine this like when you are in the car and the driver presses the accelerator to go faster. Dark matter is the guide of the universe and it presses the “gas pedal” for the universe to expand faster. The discovery of dark matter is one of the things we expect in the coming decades, as it is part of the goals of already operational telescopes, such as the X-ray space telescope eROSITA.

You have an exceptional international career as a researcher. How do you think Greece could be improved in the field of Astrophysics?

Greece has amazing scientists and astrophysicists with international careers and collaborations that contribute to discoveries that help with universe exploration. From my experience at Greek universities and through collaborations, I can say that astrophysics is one of the disciplines that contributes dynamically worldwide. I would like to see a dramatic improvement in the program management by government agencies. Bureaucracy and scientific programs’ mismanagement as well as lack of funding make it difficult for my colleagues to do their research. If they were in a another country they would invest more of their time actually doing research. We still have a long way to go to solve all these problems.

What impressed the world of Astrophysics in 2020?

In 2020, unfortunately, we all suffered from the coronavirus pandemic and it is unfair to focus on this year. Unfair to all these colleagues who were forced to work from home and at the same time become teachers for their children, myself included. I can talk about 2019 and the first photo of the black hole in the galaxy M87, the world-famous orange donut! M87 is an active galaxy, meaning that its nucleus releases huge amounts of energy into the environment, more than the galaxy itself. It is known for displaying an optical jet, which is rare. So the first photo of a black hole is a proof that our theories about the center of galaxies are true. We believe that in the center of each galaxy there is a black hole, which absorbs matter and light. Nothing can escape. However, there is something there, an area without return. Everything that goes through that barrier  does not escape. Anything that does not pass, revolves around it, emitting radiation. This was observed by the Event Horizon Telescope, the international network of telescopes that aims to take a photo in the radio waves of the black hole in the center of the galaxy. This was the orange donut that went viral the day the discovery was announced. It shows the matter orbiting, what we call a black hole. This confirmed our theories! 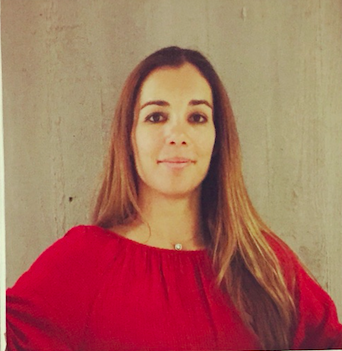 We thank Dr. Eleni Vardoulaki for the interview she gave us! You can follow her research work here.