What is the color of radioactivity?

When Greek Women in STEM go to the movies

What is the color of radioactivity?

When Greek Women in STEM go to the movies

The Science Behind the Color

The answer is both yes and no.

Let us begin with the “no” option. Radioactivity, by definition, is the result of the decay of an unstable nucleus, in the form of radiation and/or particles. Radioactive decay may be a type of radiation but without being visible in the human eye.

So, where does the stereotypic perception of the green glow come from?

In fact, there are some radioactive elements, which when paired with luminescent materials, they can glow in the dark, due to radioluminescence. An example is the green glowing clocks (known as radium clocks), which were widely used from 1917 till their ban in 1960 (see the movie “Radium girls”). The material of the clock was a mixture of copper/zinc sulfide, which emits a green glow when paired with the radioactive radium-226. Specifically, the particles emitted from radium-226 transfer energy to the luminescent material and cause the excitation of the orbital electrons. Upon the return of these electrons to the steady state, a green light is emitted.

Additionally, blue light emissions can derive from radioactive aqueous solutions. In that case, the phenomenon of Cherenkov is observed. In the popular show “Chernobyl”, after the explosion of the nuclear reactor, which contained water, a characteristic blue glow was observed. For this phenomenon, the charged particles can travel faster than the speed of light in the water resulting in the emission of a blue light.

In conclusion, the radioactive elements do not glow in any color in the dark, but there are certain exceptions. This fact does not make radioactivity less interesting, only more difficult to be portrayed on the big screen. 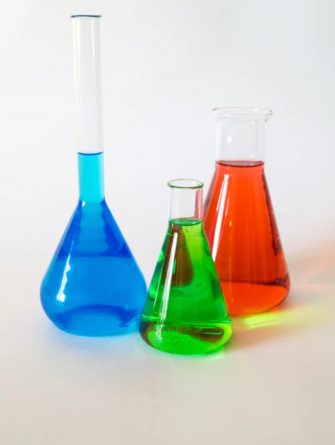 Photo by Alex Kondratiev on Unsplash