What exactly is CRISPR/Cas9?

What exactly is CRISPR/Cas9?

On October 7, 2020, the Nobel Prize in Chemistry was awarded to Emmanuelle Charpentier and Jennifer A. Doudna,

two women scientists, for development of the genome editing tool called CRISPR-Cas9 (pronounced crisper). The scientists made history by becoming the first all-women duo to be awarded a Nobel Prize in a specific category. The  scientific community describes the CRISPR / Cas9 system as a pair of “molecular scissors” that can change the genome of organisms at science’s will.

But how does this molecular scissor work and why was it so important to (rightly) win the Nobel Prize in Chemistry?

Before we go into the process of genetic modification, it is important to explain some of the concepts on which each genetic tool is based. Genetic modification is defined as the deliberate modification of the characteristics of an organism by manipulating its genetic material. Genetic material, or genome, or DNA in common, is the genetic information that determines all the characteristics of an organism. The genetic information in DNA is converted into a functional product through the production of proteins. In order for the information contained in DNA to reach protein production, an intermediate messenger molecule, called RNA, is needed. The process of converting (called transcription) DNA into RNA and the subsequent translation of RNA into protein constitutes the central dogma of Molecular Biology.

The CRISPR/ Cas9 system exploits this mechanism to cause changes in DNA that will eventually change the proteins produced. 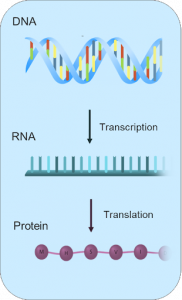 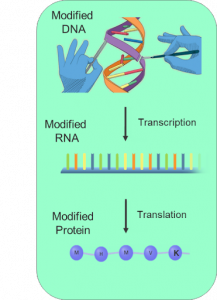 The CRISPR / Cas9 system consists of 2 key molecules: The Cas9 protein which acts as a scissor that cuts the DNA in a specific place, and an RNA molecule called guide RNA that guides Cas9 to the specific part of DNA scientists aim to change. When the Cas9 protein cuts the DNA, the cell recognizes the “damage” done in the DNA , and begins the repair process. When repairing DNA, the cell has two options: either 1) join the two DNA fragments, or 2) use a DNA template, similar to the “broken” one, to repair the damage. Scientists take advantage of the endogenous repair mechanism according to their needs. If they want to insert a mutation into DNA then they just let the cell reattach the fragments as this is a process often leads to errors causing mutations. If they want to repair or insert a new part into the DNA, then they give the cell a custom made DNA molecule that will act as a template that the repair mechanism will copy to repair the damage. 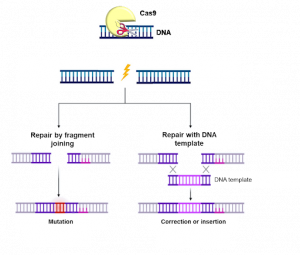 What are the applications of the CRISPR / Cas9 system?

Genetic modification has innumerable applications in almost all areas of life sciences and everyday life. By modifying the genetic material of organisms, scientists can discover the mechanism of various inherited diseases and find or optimize cures. It is  also possible to directly correct genes responsible for a disease, thus treating the patient without the use of drugs or  even help the immune system fight cancer. And while most of these applications in medicine are still in the experimental stage, in other areas of science CRISPR / Cas9 is already being used in practice beyond the experimental stage. For example, the company Tropic Biosciences in the United Kingdom made a variety of decaffeinated coffee beans, in California the company Synthetic Genomics created algae that can be used to produce biofuels, while in Brazil scientists are working to produce the first spicy tomatoes! The CRISPR / Cas9 system was first described in 2012 and in just 8 years has dominated research in the Life Sciences and is already applied to the production of  food, materials and fuels. Apparently, this is just the beginning. 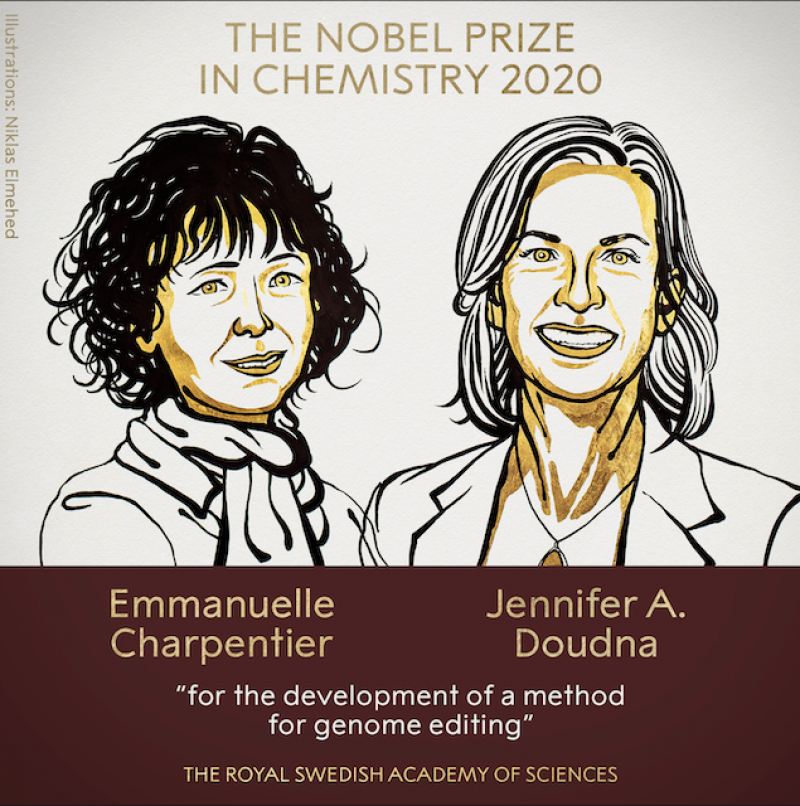