Business through the academic route.

Business through the academic route.

Magy Kontou is co-founder and Lead Product and UI/UX Designer of SimpleApps, a multi-award winning tech startup. The company operates as a mobile and digital agency, while its services have received awards in numerous competitions for young entrepreneurship and innovation.

Magy is also a co-organiser for the Google Developers Group Athens (GDG Athens) and an ambassador for Women Techmakers (Google), as well as a member of the Tech Talent School team. She is a frequent speaker at competitions, panel discussions and events on topics related to entrepreneurship and technology. She is also involved in hands-on workshops around digital/mobile app, product design and mobile marketing. She has been included twice in the 40Under40 list of Fortune magazine. She holds a Bachelor degree in Computer Science and a Masters degree in Mobile Computing from the University of Hertfordshire (UH) of England, UK.

Magy told us about her career and the demanding lifestyle of a woman in business and the developing world of computer science.

What was it that inspired you to work in computer science and technology?

From the age of 3, I remember getting so excited with the radio transmitter my dad used for his work (he worked as a marine radio operator), the Mors symbol cards and the endless hours I spent at the “electrical” control panel they used for ships. At the age of 5, I broke my godfather’s record (aged 18 at the time) at Pinball (Windows 95). By 7 years old I was playing with gadgets, video games, LEGO and spending countless hours in gaming (GameBoy, Nintendo 64 and PC). The last two are my favourite hobbies to this day! Before going to university I hadn’t written “a single line of code”. I chose Computer Science though because technology was a part of my everyday life and I was so familiar with it that studying it was an “obvious” choice for me. Computer Science and Technology offer me countless moments of creativity and continuous development – as you start an idea from nothing and you turn it into a digital product/service which can be used by millions of users worldwide or it can actually solve a problem. Many say that “the best way to destroy a hobby is to turn it into a carrier” – well this work is a pleasure for me, it helps me develop “tirelessly” as a professional and I go to the office in the morning with a smile on my face.

Why do you think there aren’t more women working in the computer science and technology industries?

Unintentionally or even jokingly – we reproduce stereotypes such as “this is for boys”, “programmers are weird and unsociable”. Technology doesn’t have a sex nor does it limit your personality. Many times – especially at a younger age or during our first professional steps, we seek for role models as a guiding example. Unfortunately, the female role models in leadership or computer science are far fewer than the male ones and many times girls/women find it difficult to relate with them. Computer science tends to be synonymous with “writing code” or “being a developer”, which in reality is only a part of what someone can be involved in within the industry. Computer science is linked to robotics, micro-electronics, data analysis, product design, UI/UX design, as well as sales, marketing or business. I think it is necessary to present to children (boys and girls) the possibilities, the available options and the dynamic of these industries within the school environment. This will enable them to choose if it matches their personality or their interests. Also reproducing role models can help one relate to the projected images [of those role models]. We need women in technology – not because we “have to” have a work environment split “50-50”, but because we produce digital products/services that are targeted towards both sexes. It wouldn’t be wise not to include representatives of a sex during the design process, as we won’t comprehend in full the needs and desires of all of our users. Technology evolves from the complementarity and diversity of its people.

What would you advise a woman who would like to get into technology?

We often refer to examples of people in technology who became successful “writing code in their garage”, “quitting university” or “becoming developers within two weeks”. However, we forget to mention the hundreds of those who developed their skills because they completed their studies or because they worked hard within their profession. If it is possible – and if of course their is the interest – I believe that women need to invest time in their academic education or get involved in workshops/seminars, so as to get a first glimpse of the field. It is equally important to participate in meetups organised by a range of organisations and communities, as they offer an opportunity to mingle with industry professionals, to share one’s opinions, concerns or knowledge and obtain a more realistic picture of the industry.

Have you experienced challenges in your work environment as a woman in comparison to your male colleagues? If yes, how did you overcome them?

Never – the contrary (I might have been lucky)! To this day, my colleagues treat me with utter respect, as an equal, without discrimination and I am thankful to them. In fact most men in computer science show their admiration and support towards “women in technology” and are happy to collaborate with us.

What is your take on the computer science and technology industries in Greece?

If we take into account that globally only 18% of women study computer science, 26% of the “Computing Jobs” are occupied by women and only 5% of those are in leadership roles in the tech industry – the situation in Greece is no exception. Despite all that, in the last few years we have seen many initiatives mainly from private companies, to bring technology into schools (through competitions in robotics, conferences etc.). At this point in time, Greece has many respectable tech businesses, especially startups. A factor contributing to their rise was initiatives targeted at supporting young entrepreneurship and innovation, as well as investment programs offering opportunities to young entrepreneurs to launch their own tech companies. I am very optimistic for the upcoming years. 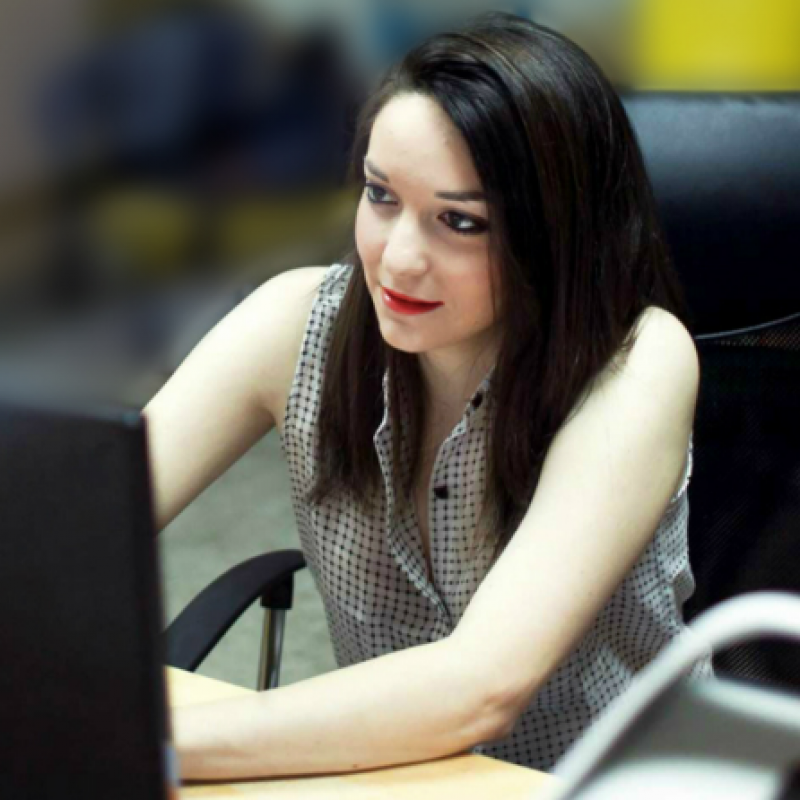